Like any first-in-category product, the upgraded 900AP+ has its share of limitations and problems. But the first positive surprise that I discovered is that, contrary to the information in D-Link's Press Release, the 900AP+ works with clients and Access Points other than those in D-Link's AirPlus and AirPro product lines. (Of course, if you use anything other than what's on D-Link's list, don't expect any help from them!)

Updated 10/28/02 Shortly after this article first appeared, a friend at Intersil wrote to tell me that the 900AP+ is actually implementing a feature called Wireless Distribution System (WDS). He included a nice Intersil Apps note (in PDF form), which has since been taken down from the net. He said the feature was originally implemented awhile ago by a company called Choice Microsystems which supplied MACs (Media Access Control) to Agere, Cisco, Symbol, and Harris (Intersil). Although Intersil bought Choice, the other companies retained the rights to the original technology, and the feature lives on in OEM reference designs, although D-Link is the first to bring it to market at this price point.

In my experiments, I was able to get the 900AP+ to successfully repeat using a D-Link DI-614+ wireless router, and SMC 2655W 802.11b Access Point. I also used both D-Link DWL-650+ and ORiNOCO Gold PC cards in my Dell Inspiron 4100 laptop running Windows XP Home, and smoothly roamed from the main AP to the 900AP+ without problems.

But so much for the good news. Figure 2 shows one of the prices that you'll pay for using the 900AP+ to wirelessly extend your WLAN. 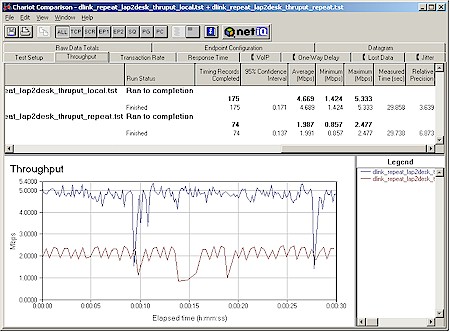 Figure 2: Comparison of direct and repeated throughput
(click on the image for a full-sized view)

The plot shows a test run with an ORiNOCO Gold client, 900AP+ in repeating mode, and SMC2665W as the main AP. The client was allowed to auto-adjust transmit rate, and WEP was disabled. I ran the IxChariot throughput.scr script, with TCP protocol and default settings. In both cases, my laptop was sitting about 3 feet away from the AP that it was associated with, so we shouldn't be seeing any radio range effects. I used standard 802.11b (not the 22Mbps PBCC mode that the 900AP+ will support) for the tests.

The results show a significant (over 50%) throughput reduction when the test client is associated (connected) with the 900AP+ (bottom plot) vs. associated with the main WLAN Access Point (the one connected directly to the wired LAN). Most of the reduction comes from using the 900AP+'s single radio for two simultaneous tranfers, one from the client to 900AP+, the other from the 900AP+ to main AP. The rest is probably processing overhead.

The second limitation I found is the inability to set the 900AP+ to a separate channel when it's in repeating mode. Since there's only one radio, and it has to communicate back to the main AP, the 900AP+ will override its channel setting and automatically set itself to the main AP's channel. This might be counter-intuitive to folks who are accustomed to setting up WLANs with multiple wired APs, since the rule for those installations is to avoid having adjacent AP's set to the same channel. But once you understand how the 900AP+ works, the single channel makes sense.

The third "gotcha" is that you can't chain 900AP+s together to even further extend your WLAN's range. Although you can have multiple 900AP+'s repeating to a single main AP (I haven't tried this), they all would use the same channel. I think you can see from Figure 2, that the performance from such a configuration wouldn't be very satisfying!

The last limitation is that once you set the 900AP+ to repeating mode, you lose the ability to access its built-in admin function via wireless connection. If you have a problem or want to change a setting, you need to physically plug into the good ol' Ethernet jack to do your business. So don't put the 900AP+ anyplace where you can't get at it easily for the inevitable reboot! Updated 10/28/02 Also note that while in Repeater mode, the only thing that a computer plugged into the 900AP+'s Ethernet jack will connect to is its built-in admin HTTP server. You won't be able to run wireless clients via the Repeater and bridge to a wired computer or LAN. (Hey, whaddya want for under $100?!)

Despite all the above limitations, once I got things running, it was great to finally be able to take my laptop to spots in my home where I've never been able to get a decent wireless signal and be solidly connected to my LAN.

There's actually one other problem, which is the lack of information from D-Link that describes how to configure and check out the new repeating function. Since it may not be obvious to you how to set it up (and to make sure it's working) I'll give that a shot in the next section.