Smart antenna technologies capable of automatically adapting to dynamic changes in the environment to maximize the availability of quality signal paths have become the focus of next generation Wi-Fi solutions. Indeed, the future wireless LAN standard (802.11n) is currently in development and scheduled for ratification in early 2007. It is intended to build on the current OFDM standard and allow higher throughputs, longer ranges and more stable connections by introducing multiple antenna technologies.

The technique of using more than one antenna to transmit and receive OFDM signals is referred to as the Multiple Input/Multiple Output OFDM, or MIMO-OFDM. The basic principle behind MIMO technology is to exploit multipath signals in order to improve signal quality and increase range and throughput. MIMO uses multipath signals to carry more information, which is recombined on the receiving side by the MIMO algorithms. When strong multipath is present, multiple antennas can be used to send more than one data stream on each subcarrier, and theoretically double the achievable data rate. This sophisticated method of exploiting multipath to transmit more than one data stream on a single OFDM subcarrier is referred to as spatial multiplexing.

Several vendors today are offering proprietary products employing spatial multiplexing in advance of the upcoming 802.11n standard that demonstrate promising performance improvements. Of course when multipath conditions are not present, or when these devices interoperate with non-proprietary devices, they must revert back to the standard single stream mode. When processing single stream data, MIMO-OFDM receivers use a smart antenna technique referred to as maximum ratio combining, or MRC-OFDM.

In essence, MRC-OFDM is the most basic form of MIMO technology that is fully compatible with the current 802.11g standard. Used with today's wireless LANs, the user will experience the smart antenna benefits of increased throughput, range and link robustness. The MRC-OFDM receiver works by first converting the signals from multiple antennas into the individual subchannels, and then combining them signals on a subcarrier basis to optimize the quality of the OFDM signal, as is shown in Figure 4. Because the signal combination is done in the frequency domain (FD), MRC-OFDM is able to utilize the multipath diversity to further enhance the OFDM signal. As a result, dead spots are eliminated, range is improved, and effective throughput is increased.

Conceptually, MRC-OFDM is the diversity combining smart antenna technology discussed above, and shown in Figure 2, but optimized for the OFDM signal. However, other techniques that combine the antenna signals in the time domain are ultimately less effective than MRC-OFDM. Even if eight or ten antennas are used, as with the BeamFlex system, the optimal combining for each data subcarrier cannot be achieved. As a result, fading will occur at certain frequencies, and performance will be lost. Lab testing was done to confirm these trends, and the findings are summarized below. 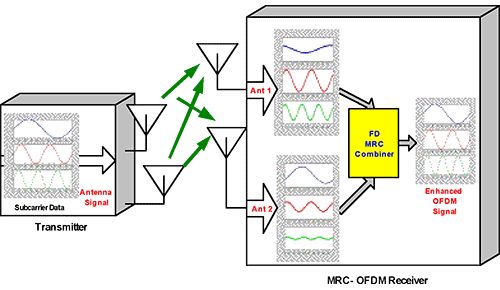 Figure 4: MRC-OFDM receivers combine the signals from two or more antenna in the frequency domain (FD) to enhance OFDM performance.

Smart antenna techniques such as MIMO-OFDM will greatly improve the performance of the next generation of wireless LAN systems. The IEEE is working toward the next standard for wireless products using multiple antennas to increase throughput fivefold, and greatly improve link range and reliability. The 802.11n standard will include other technologies as well, such as advanced coding, extended channel bandwidths (channel bonding), and efficient networking protocols, while at the same time providing backward compatibility with today's wireless LANs.

Fortunately a smart antenna technology is available now that optimizes the performance of today's standard wireless LANs. This is MRC-OFDM: it is completely compatible with all 802.11 devices and it is the first true step toward MIMO wireless.
Ralink Technology Corporation believes the information in this document is accurate. However, Ralink Technology reserves the right to make changes without further notice and assumes no responsibility for any inaccuracies that may be contained in this document, or to make commitment to keep current the contained information.