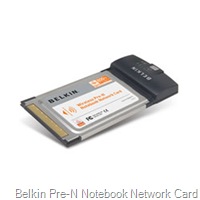 Pre-N,  the precursor  to  the upcoming 802.11n release, promises speeds  that exceed 802.11g, and up  to twice  the wireless coverage area. See  the  following chart  for more detailed  information.