The OfficeConnect 11g is about the size of a slim hardcover book and has a plastic shell cover (with internal metal shield) that's mated to a metal bottom frame. It has all its indicators on the front (Alert, Power, WLAN, LAN Status and Cable/DSL), connectors on the back and screw-head mounting slots on the bottom for wall mounting. The dual dipole antennas are hard-wired, but movable in all directions.

The indicators are all combination Link/Activity and change color to indicate 10 or 100Mbps operation (except for the WLAN indicator). They're fairly small, though, and you pretty much have to view then straight-on to see what's going on. Both the WAN and LAN ports are 10/100 auto MDI / MDI-X, which willl figure out how to connect to whatever you plug in - whether you use a Normal or Crossover cable. Although there's no hardware reset switch, you can perform a reset-to-factory-defaults by powering off the router, plugging a normal UTP cable into the WAN and any LAN port and powering up. (First time I've seen this trick!)

Unlike its predecessor, which was based on the ADMtek 5106 Home Gateway Controller, the OfficeConnect 11g is based on GlobespanVirata's ISL3893 WiSOC (Wireless System-on-a-Chip). Figure 1 shows a very clean board design, with flash memory, RAM, ADMtek 6996 5 port 10/100 switch and PRISM GT-based 11g radio built right onto the main board. 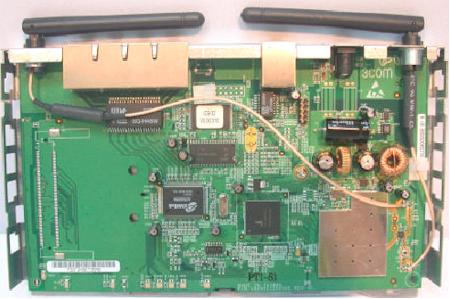 Both products are actually manufactured by Accton, which is the parent company of SMC Networks and which also OEM's some of Microsoft's wireless products.