BuffaloTech provides a Client Manager program that cooperates well with Windows XP's "Zero Configuration" capability. The Client Manger even pops up a warning if you haven't unchecked the "Use Windows to configure my wireless network settings" checkbox in XP's Wireless Networks properties when you launch it.

Figure 2: AirStation Client Manager
(click on the image for a full-sized view)

The Client Manager includes a "Free Spot" button (Figure 3), which caused me some head-scratching until I clicked on it and found that it was BuffaloTech's version of XP's Available wireless Networks utility. 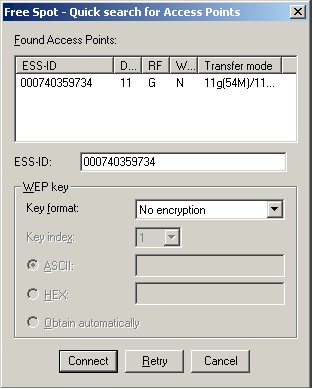 You won't find the ability to change any card properties other than enabling WEP encryption and setting a key, though. You'll have to do that the old-fashioned way, via the Network Adapter's Advanced properties, shown in Figure 4. 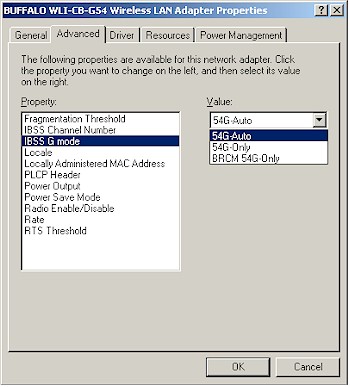 Note that just as in the AirStation router itself, there's no "11b only" mode, but you do have the ability to adjust the transmit power and rate.

In the end, if you're using XP, I don't see any advantage to using BuffaloTech's Client Manager, even though it has some built-in utilities to help manage its companion AirStation router, and test your wireless connection. The only unique function it adds is support for the AirStation's Intrusion Detection feature, which is supposed to pop-up a warning on your screen when an "intrusion" event is detected. Now, if it displayed signal and signal-to-noise readings in dB, or had throughput vs. time plots like some other client utilities... that would be more interesting!