The last, at perhaps most dreaded step from both a cost and complexity view, is going to a multiple AP setup. Not long ago, a multiple-AP setup meant running CAT5 Ethernet cable and AC power to each location where an AP was to be located. Because of the expense (and permanence) involved in running that cabling, advance planning in the form of a site survey had to first be done. Given the work involved, most home networkers unhappily put up with their WLAN's performance idiosyncracies, or gave up in frustration and returned their wireless gear altogether.

But this option really isn't as hard to implement as it used to be due to the emergence of Ethernet alternatives that use other wires already running through your home's walls, i.e. phone and power.

HomePNA (HPNA) equipment uses your telephone wiring to carry digital data at a maximum raw bit rate of 10Mbps, which typically yields a useable data rate of about 5Mbps. HPNA doesn't interfere with the phone line's normal use for voice, data, FAX, or even DSL, and doesn't even require the phone line to actually be in service.

HomePlug products operate in a similar way to HPNA, but use AC power wiring instead of phone lines. HomePlug has a 14Mbps max raw data rate, but delivers useable bandwidth similar to HPNA's.

Both technologies are used in a similar way to get a wired connection to a remote access point. Figure 5 shows an example setup. 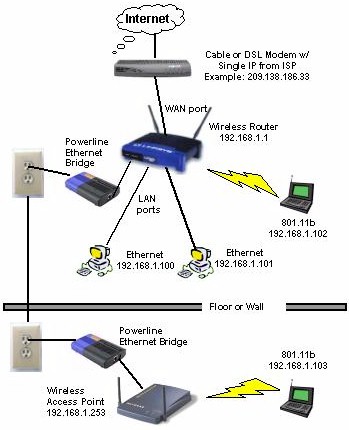 The diagram shows the basic idea when using alternative networking methods, using a powerline-based example. A HomePlug to Ethernet Bridge connects your Ethernet LAN to the power line on one end, and a second Bridge is used to connect the remote AP. More APs can be added by duplicating the remote HomePlug Bridge / AP pairs.

An HPNA-based setup would look essentially the same, with HPNA to Ethernet Bridges (and connection to a common phone line!) substituted for the HomePlug Bridges and their AC connections.

There are many variations on this basic setup. You can use a separate router and AP, or even a wireless router with built-in HomePlug bridge such as SpeedStream's 2524 Powerline Wireless DSL/Cable Router. Speedstream also has its 2521 Powerline 802.11b Wireless Access Point, which combines an 802.11b AP and HomePlug-to-Ethernet bridge in a "wall-wart" sized package!

I prefer HomePlug based setups to those based on HPNA, mainly because they're more flexible - you can usually find a power outlet in every room, but not a phone jack. I also really like the mini-AP mentioned above because it's just so darned easy to move around! Who needs to spend a lot of time planning where to put additional APs when all you need to do is unplug it from one outlet and move it to another?

The downside of both HPNA and Powerline approaches, however, is that they won't work for everyone. Both phone and especially power wiring is not exactly the best electrical medium for high-speed data signals (I think it borders on magic that this stuff even works at all!). Folks with older homes especially may find that their HPNA or HomePlug based networks run too slowly to be of practical use, if they even run at all! Range can be limited too, sometimes preventing their use for LAN extension to a backyard office or free-standing garage.