The magazine in a normal firearm would hold ammunition, but the magazine in the BlueSniper rifle holds something much more geeky - a gumstick-sized computer. You'll need to make the box (Figure 10) about 1.75 X 2 X 3.5 inches (4.4 X 5 X 8.9 cm) with the two sides extended to 4.75 inches (12 cm) to allow for a through-bolt to attach the box to the stock. You will also need to drill a small hole for the LED that indicates when the computer is powered.

While the magazine holder doesn't have to be big, it must be large enough to hold the small computer, wires and the on/off switch. The team from Flexilis chose to have the on/off switch inside the box, but you may find it easier to position it outside. Figure 11 shows how all the electrical parts are connected.

Figure 11: Wiring Diagram for the computer, batteries, LED and switch 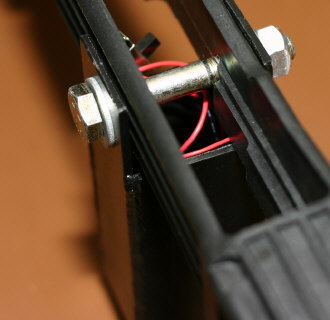 If you followed our instructions, your gun should look similar to the one pictured in Figure 13. There is more than one way to make a Bluetooth rifle and John Hering encourages people to modify and improve the design. For example, different antennas can be used for longer range. Imagine the power of the rifle if you attached a 24 dBi parabolic dish! Of course, the BlueSniper would no longer look like a rifle, but rather a futuristic weapon that Marvin the Martian would carry. 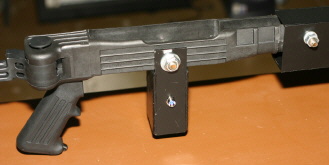