Configuration of the 330 is straightforward and can be done without the aid of the Windows-based Discovery and Setup Wizard applications that ASUS includes. The trickiest part of the setup will be setting a computer to an IP address compatible with the 330's 192.168.1.1 default address. Unlike other utilities I've used, neither of the ASUS programs can change the 330's IP address, which makes them of limited use in my opinion. 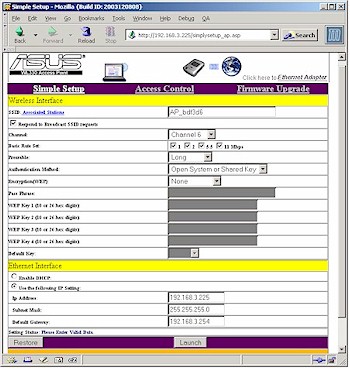 Figure 4: AP Setup screen
(click on the image for a full-sized view)

What you see in Figure 4 is pretty much what you get in the way of configuration options, except for the Wireless Distribution System (WDS) bridging options shown later in Figure 5. I don't know why ASUS chose such a small default font for the interface, but thankfully it can be enlarged using your browser's Text Size control.

Another negative is that the changes you make on each page must be saved with the Launch (?) button that invokes an over 20 second reboot cycle. I was also disappointed to find only one monitoring feature, which lists only the MAC address of associated clients.

ASUS' User Manual says the Basic Rate Set setting controls the Transmit rate and Basic Rate set that the 330 sends out, but my tests showed it controlled neither. Though 64 and 128 bit WEP is supported, unfortunately the more secure Wi-Fi Protected Access (WPA) isn't. 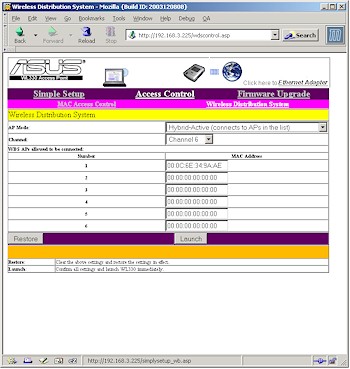 Figure 5: WDS setup
(click on the image for a full-sized view)

The WDS features have a few important subtleties. First, the 330 supports what ASUS calls "Hybrid" mode, which is illustrated by Figure 6 - an animated graphic I grabbed from ASUS' WL-300g's admin page.

In ASUS' terminology, "Hybrid" means that the AP can both wirelessly bridge traffic between LANs while at the same time supporting connection to associated wireless clients.

Figure 7 - also grabbed from ASUS' WL-300g's admin page - shows the bridging-only mode that the WL330 does not support. This distinction will probably not matter to most users - after all, we're not talking about an "enterprise-grade" bridge here - but this difference does require further security precautions to be taken. Two "Hybrid" modes are actually supported: Active, which requires entering the MAC addresses of devices that are allowed to bridge; and Passive, which allows any WDS device to connect.

I tried out the bridging using an ASUS WL-300g 11g Access Point and after some experimentation, got things up and running. I had to set the WL-300g to also use Hybrid mode, both devices to the same channel and entered the WL-330's MAC address into the 300g's Remote Bridge List.