If you don't need an Access Point, the 330 can also act as an 802.11b-to-Ethernet converter, supporting both AdHoc and Infrastructure modes. The 330's default settings should allow you to get connected to any in-range AP or wireless router that's not running WEP-encrypted, simply by powering off, moving the 330's mode switch from AP to Adaptor, then powering up. 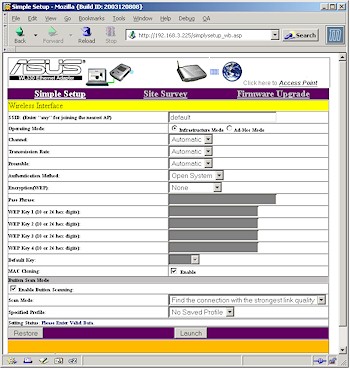 Figure 8: Adapter mode setup
(click on the image for a full-sized view)

If you'd rather (or must) control the setup of the 330 in Adaptor mode, it also has a web-based admin interface. Figure 8 shows that you have a full set of configuration options to chose from. (Note that the Scan Mode and Specified Profile selectors in the Button Scan Mode section provide only the options shown.)

The default settings worked fine to join the WL-300g Access Point that I had set up, with the 330's Wireless LED lighting up within a minute of being powered up with its mode switch set to Adaptor. It was nice to not have to experiment with switch settings or normal / crossover cables thanks to the 330's auto MDI / MDI-X feature of the Ethernet port!