Basic Features and a Look Inside

The 51AB comes in Linksys' signature purple and grey plastic box. All indicator lights are on the front of the box and are bright and viewable from a wide angle. The indicators include: Power, Diag, Link/Activity Full/Collision and 100Mbps for the 10/100 Ethernet LAN connection, and separate Activity and Link lights for the 802.11a and 11b wireless LAN connections.

The PDF User Guide says that the "WLAN Link LED lights whenever there is a successful wireless connection". But they both were steadily lit whenever the 51AB was running, regardless of whether clients were in range or not. I also found the Activity LEDs somewhat counter-intuitive. They faintly blinked constantly at a rapid rate when the AP was idle, and brightened to an always on state when traffic was flowing. So when I was doing long my long file transfer tests, this meant that the blinking LED was the link with no traffic.

The Ethernet 10/100 port and power jack are on the rear panel, along with a factory-defaults reset switch. Linksys includes a wall-mounting plate that does double-duty as an adapter to allow Linksys' smaller boxes (such as their 5 port switch) to be stacked with their "normal" sized boxes. There was also a CD with the PDF User Guide and Windows-based Setup Wizard, along with a normal UTP Ethernet cable in my box, although the User Guide didn't mention one.

Since the information is freely available on the FCC website, I thought I'd give you a look inside the 51AB. 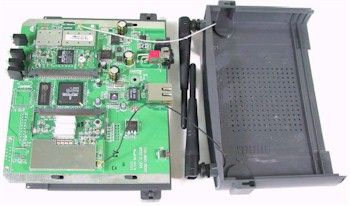 Figure 1: WAP51AB Internal view
(click on the image for a full-sized view)

Figure 1 shows a single clean motherboard, with two radios contained on miniPCI cards. (The miniPCI format is commonly used for the built-in wireless feature of many notebooks.) The FCC documents indicate that the 11a radio is probably manufactured by Gemtek, a popular Taiwan OEM/ODM of wireless modules and products. Given the similarity of the model numbers on Gemtek's website and inside the 51AB, my guess is Gemtek sources the entire 51AB too. The 11b radio is a Broadcom BCM94301, which is their 802.11b reference design.

Powering all of this is a Broadcom BCM4702 Wireless Network Processor that is clocked at 125MHz. From what I could tell, it has plenty of poop and had no problems handling AP chores for both radios under full-speed conditions.

Each radio is connected to one, non-removable external antenna. Facing the front of the router, the 802.11a antenna is on the right, and the 802.11b antenna is on the left. Although both radio modules have a connector pad for a second antenna for diversity purposes, neither radio connects to one. The antennas connect to each radio via miniature (and I mean tiny!) push-on RF connectors. Although both external antennas are the same length, the "real" antenna is a cut-to-length piece of wire inside each plastic "antenna" shell, with each one being properly sized for the 2.4 and 5GHz wavelengths.

Let's go see how to drive this thing...