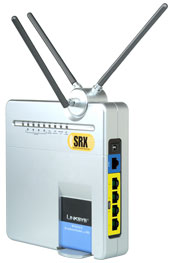 But unlike Belkin, Linksys has chosen to eschew the use of both Airgo's "True MIMO" and Belkin's "Pre-N" branding. instead, Linksys is contributing its SRX moniker (Speed and Range eXpansion) to the industry's continuing cause of totally confusing the wireless networking product buying public.

In this review, I'll look at the WRT54GX, the latest in Linksys' ever-expanding "Wireless-G" product line. I'll take a quick run through the product's feature set and then take a deep dive into exploring many of the performance and interoperability claims of the SRX / True MIMO technology.

NOTE: In the interest of full disclosure, you should know that I was contracted by Airgo Networks last year to perform an evaluation of engineering samples of pre-release Pre-N products. However, all testing presented in this report was performed on released Linksys SRX product.