The WG602 comes in the silver plastic package that's indicative of NETGEAR's consumer-oriented "Platinum" product line. It's an attractive box, and comes with both a vertical-mount desktop stand and slots on its bottom for wall or ceiling mounting.

All the back-lit icon-type indicator lights are on the front of the box and are bright and viewable from a wide angle. The indicators are: Power, Ethernet Link/Activity, and Wireless Link/Activity. The Wireless indicator blinks constantly at an approximately 1 second rate, whether or not there are any stations in-range or associated, and flashes quickly when wireless traffic is flowing.

The Ethernet 10/100 port and power jack are on the rear panel, along with a factory-defaults reset switch. Also included are a CD with the PDF User Guide and a normal UTP Ethernet cable.

Figure 1 shows a shot of the WG602's circuit board, which is powered by an IDT 32334 Communications Processor. 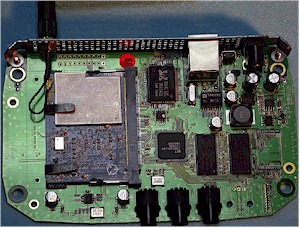 Figure 1: WG602 board
(click on the image for a full-sized view)

Like most recent Access Points, the radio is contained on a mini-PCI module and in the picture appears to be an Intersil 39000M, which I think is an engineering evaluation product. In the shipping product, this has been replaced by another radio that is marked XG-600, which I'm guessing is OEM'd from ZCom. The 10/100 Ethernet connection is provided via a Realtek RTL8139.

The single dipole antenna is attached via an RP-SMA connector, which seems to be an increasingly popular choice by many consumer wireless manufacturers except for Linksys, which sticks with their RP-TNC style.

There's not much else to tell about the inside, so I'll move on to the Setup.