But the real story for the N1 is its wireless performance, so let's get to it. Testing was done with a Belkin Belkin N1 Notebook Card (F5D8011) in a 1GHz Dell Inspiron notebook running WinXP Home SP2 with all the latest updates. I downloaded and installed the latest client release (1.0.0.28) from Belkin's website and used the Belkin client utility version 2.0.0.30. It reported a chip version of 0.0.0.129 and driver version of 6.0.1.4.

The router also was loaded with latest (1.01.23) firmware and I left all factory default settings in place (see Figure 13 for the details).

Figure 15 shows an IxChariot plot of downlink throughput, i.e. router/AP to client, with the router and card about six feet apart (my Location 1). You can see the 43 Mbps average throughput over the 2 minute test period is far below the 300 Mbps speed prominently displayed in the N1's marketing material, coming nowhere near even 100 Mbps. This is partly due to the fact that the N1's 100 Mbps ports limit the single-direction wireless throughput. 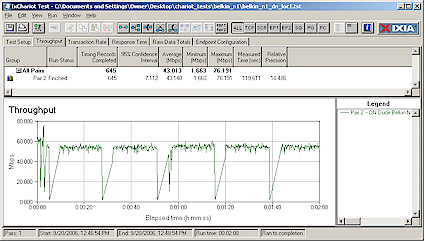 But the 3-5 second throughput "dropouts" that occur at approximately 30 second intervals aren't helping the average throughput much either. These are actual pauses in data transmission (you can see the client card light stop blinking). Although my investigations into wireless streaming revealed that throughput variation isn't as much of a problem as I had thought, the N1's behavior would definitely cause problems for anyone trying to use the product for high-rate continuous streaming applications.

I ran a quick experiment using a VoWLAN phone to see if I could notice the throughput dropouts. I had the router set to AP mode and watched the LED on the WAN port that connected the N1 into my LAN. To my surprise, I didn't notice any dropouts and the router WLAN port blinked continuously during the call. So my conclusion from this experiment is that the dropouts might be due to high continuous data rate used in the IxChariot test. 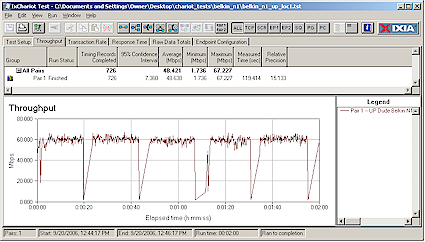 Figure 17 shows the results of a simultaneous up and downlink run, which yields a total of 62 Mbps average throughput. If the dropouts weren't present, the result would be closer to 80 Mbps, since each stream tends to run at that speed between dropouts. 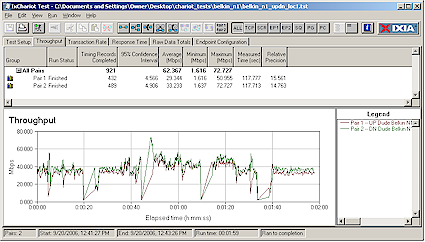 Figure 17: Location 1 throughput - simultaneous up and downlink (click to enlarge)