Because I've tested draft 11n products using the other available chipsets on the Azimuth W-Series WLAN Test Platform, I also used it for the N1 to gauge its throughput vs. range performance instead of my usual multi-location walk-around test. You can read more about the Azimuth system and the test method in Draft 802.11n Revealed: Part 1.

The plots shown below use the same data as shown in the previous article, with the N1 data added. I should note that due to the N1's dropout problem, I had to use 30 second IxChariot test runs in order to get results that didn't swing all over the place and switch to using 3 dB attenuation steps to complete the testing in a reasonable amount of time. The other plots shown use 5 second IxChariot tests and 1 dB attenuation steps. 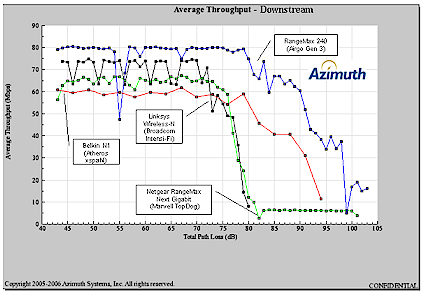 The good news in Figure 21 is that although the N1's throughput doesn't aproach that of the RangeMax 240 and Linksys Wireless-N, it doesn't drop off as quickly. It also maintains a downlink connection at high path loss values (i.e. lower signal levels) than the Linksys Wireless-N / Broadcom and has a curve closest to the best-performing Netgear Rangemax 240 / Airgo Gen 3.

Note that the 60 Mbps average throughput at lower path loss levels is better than the 43 Mbps result in the 1 minute downlink test (Figure 15). This is probably due averaging differences over the 30 second vs. 2 minute test periods.

But the N1 doesn't fare as well in the upstream / uplink plot (Figure 22). For some reason, best-case uplink throughput dropped down closer to the ~40 Mbps 2 minute average value. But once again, the N1 maintained a connection longer than the Broadcom-based product and its throughput held up better at lower signal levels. 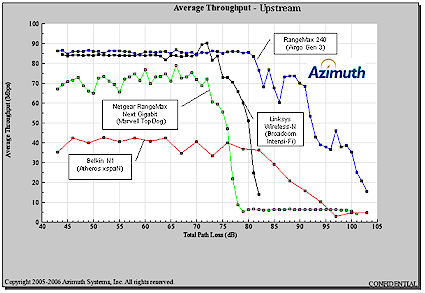