Since the Expander is intended to be as goof-proof as possible, it's pretty much a black, er, make that silver and grey box. It's slightly wider and thicker than your average PDA and attractively styled, aiming at a high spouse-approval rating.

Blue Link and Activity lights grace the top panel while Auto Configuration and recessed Reset-to-defaults buttons are positioned along its right side. The non-upgradable antenna is movable along a single 90 degree axis with locking detents at 0, 45 and 90 degree (to the Expander's body, that is) angles. 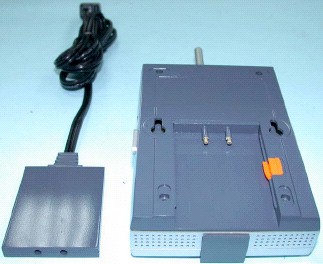 The Expander has an unusual power arrangement. The AC mains to DC converter is inside the enclosure, but the AC cord is attached via a paddle-like connector that slides into the back of the Expander enclosure and locks into place. It looks to me like at one point Linksys may have intended to supply an alternative power connector that would let the Expander snuggle right up against a wall outlet. But at least for now, you'll have to deal with the power cord.

One other "feature" is that the Expander does not have an Ethernet port. This means that it can't be used as a wireless bridge to a wired LAN and you must set it up from a wireless client.

A bright lime-green sticker on the front of the Expander's box says that the WRE54G "works with" Linksys' WAP54G, WRt54G and WRT54GS products and their website (at time of this review) expands on that notice with list of the "minimum firmware requirements you must meet" shown in the table below.

As I'll show later, this doesn't mean that these are the only products that the WRE54G will work with. But setting the Expander up with any other products means you won't get the benefit of the Windows-based setup wizard or Auto-configuration button feature.