My test approach was to run my usual four-Condition tests, once without, then once with the WSB24 connected to a WAP11 (original model) "boostee". I chose my trusty ORiNOCO Gold PC card as a test client, primarily because it works with NetStumbler, which I used for Signal-to-Noise measurements.

The first thing I did was to try to quantify the "boost", or signal "gain" provided by the WSB24. Linksys lists a "Peak Gain" spec of +14dBm, and "Receiver Gain" of +20dBm (nominal) on the WSB24's product package and brochure. But since dBm is a measurement of power level and not gain (which is the ratio of two power levels), I'm not quite sure what to do with those numbers. There's also the "maximum fixed gain of 10dBm" spec that I found in the FCCID document, again with the wrong units used. Whatever...

To make my measurement, I fired up Netstumbler and went to each of my four test locations, first measuring the WAP11 alone, then repeating the measurement with the WAP11 + WSB24. The resulting composite Netstumbler plot is shown in Figure 4. 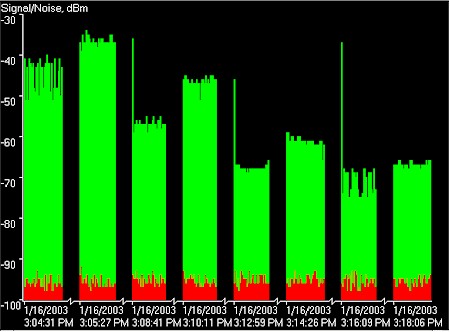 Figure 4: SNR comparison
(click on the image for a full-sized view)

You should read the plot as four pairs of bars, representing test Condition locations 1 through 4, from left to right. The first bar of each pair is the Netstumber Signal-to-Noise (SNR) measurement for the WAP11 alone; the second bar is with the WAP11+WSB24. Although it's not a clean measurement in all cases, the Conditon 2 and 3 plots most clearly show about a 10dB (or 10X) gain when the WSB24 is used.

With that little exercise out of the way, I then ran "with" and "without" throughput tests at all four locations. Table 1 summarizes the results.