But Will it Go the Distance?

Although better and more consistent throughput is a nice thing to have in a WLAN's existing footprint, many WSB24 customers will be buying it with hopes of expanding their wireless LAN's coverage area. Can it deliver the goods in that department?

To find out, I braved the snow and cold and lugged my notebook outside to do a distance test. My starting point for each test was right in front of my home's front door, which was about 50 ft and about one interior wall, one ceiling, and one exterior wall as the crow flies from the WSB24 and WAP11. I then started both Chariot (to plot throughput) and Netstumbler (to plot SNR), and trudged slowly up my driveway until I lost the signal. Figures 7 and 8 tell the tale. 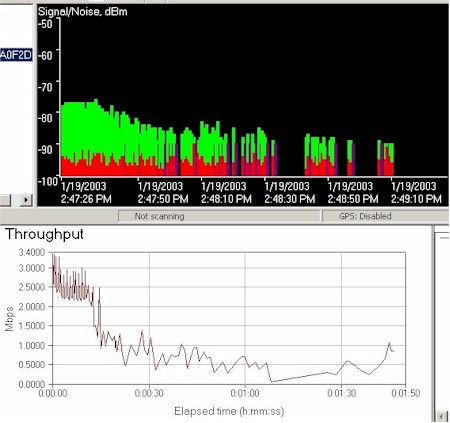 Figure 7: Distance test - without WSB24
(click on the image for a full-sized view) 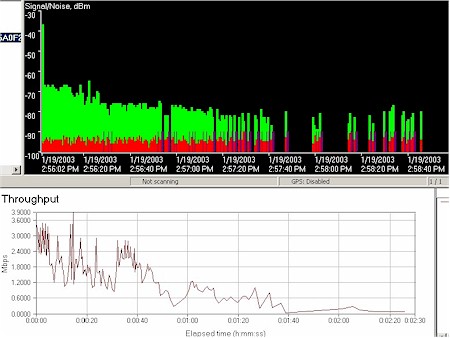 Figure 8: Distance test - with WSB24
(click on the image for a full-sized view)

In both diagrams, the 30 second point represents a point approximately 50 feet (15M) away from my front door (or about 100ft from the WAP11 and WSB24). In the "without boost" case (Figure 7), throughput has slowed to a crawl (about 0.5Mbps) and is pretty erratic. But the "with boost" (Figure 8) plot shows still erratic, but useable throughput between 1.2 and 2.4Mbps. I also estimate that the WSB24's boost bought me between 25 to 50 feet (8 to 15M) additional feet of wireless coverage, although at a pretty low throughput.