The other features you're sure to find a use for are the GS5's QoS (Quality of Service) controls. QoS is a term that we're seeing more and more lately, due to the growing popularity of applications like VoIP and streaming video that care about how packets are treated as they flow across the network. Think of QoS as a collection of techniques aimed at identifying data whose delivery across the network is time sensitive, and managing its delivery through both bandwidth allocation and prioritization schemes.

Although many vendors - Linksys included - don't make the differentiation between QoS and CoS (Class of Service) features (explained nicely by this searchSmallBizIT.com article), the GS5's includes both types in its "QoS" controls. The features that will be most useful to you will depend on what your network provider and applications support. 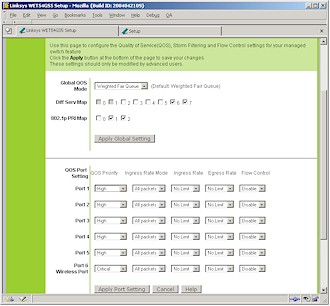 Figure 5: QoS controls
(click on the image for a larger view)

The top section in Figure 5 shows the CoS or packet prioritization controls. The GS5's Help and User Guide explain that it has four output queues per port with four different priorities. The Global QOS Mode has choices of Weighted Fair Queue or Priority. The Priority mode always forwards packets in the higher priority queue first. So if you have a lot of packets in the, say, Critical queue, packets waiting in the High queue may wait longer than you'd think before being sent along. The Weighted Fair Queue mode attempts to even the playing field by forwarding packets in each of the queues with a 8:4:2:1 ratio, for example, for every one Low queue packet, eight Critical queue packets will be sent.

The Diff Serv Map and 802.1p PRI Map controls allow specifying the bits used by these two different CoS techniques. How you set them depends on your service provider and / or application's requirements.

The lower section of Figure 5 is where you actually set each port's QoS / CoS features. Again, these settings are for physical, not logical ports, which is the main catch in the GS5's otherwise powerful set of QoS features. The physical port control limitation means that the GS5 would help ensure that a VoIP phone or adapter plugged into it could go to the head of the packet parade. But you couldn't, for example, lower the priority for a user's FTP activity, while letting all other Internet applications run at full tilt. Simply put, the GS5 lets you control priority and bandwidth use for devices, but not applications.

In addition to the priority features, you can also set Ingress and Egress Rate, i.e. bandwidth use of each port. Rates are settable from 128 kbps to 8 Mbps in doubled steps, or you can leave the No Limit default in place. Ingress Rate Mode allows even finer control by letting you specify whether the Ingress Rate limiting applies to All, Flooded (packets that the switch doesn't know where to forward), Multicast and Broadcast or just Broadcast packets. Finally, Flow Control can let upstream devices that support this feature tell the GS5 to hold off forwarding packets until the device is ready to accept it.