Like its single-band sibling, the 55AG is based on Broadcom's BCM4702 Wireless Network Processor, but uses a Broadcom BCM5325 5 port switch/PHY instead of the an ADMtek 6996 used in the WRT54G. It uses an Atheros-based mini-PCI radio for the 11a side, and Broadcom AirForce powered mini-PCI radio for 11b/g duties. 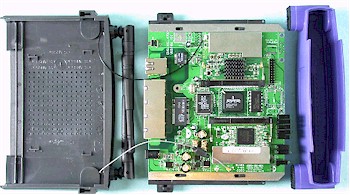 Figure 1: WRT55AG laid out for viewing
(click on the image for a full-sized view)

Figure 1 shows that each of the radios gets only one of the two external dipole antennas, and that there is no antenna attached to the second connector on each of the radio boards. This means no diversity operation, which, as you'll see in the Wireless Performance section, appears to degrade performance.

You also don't have the ability to upgrade either of the antennas to higher-gain models, since neither is attached via a connector. This issue of non-upgradeable antennas will be common to most consumer-grade dual-band products and is due to the tighter FCC rules for some of the 802.11a frequencies. It's interesting to note that with the 55AG's antenna-per-radio design, Linksys could have made the 2.4GHz (b/g) radio's antenna upgradeable, but chose not to do so. 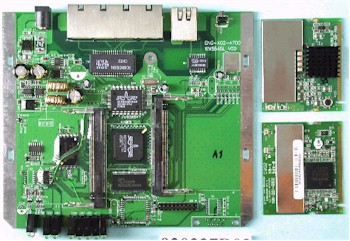 Figure 2: Closer internal view with radios removed
(click on the image for a full-sized view)

Figure 2 shows a closer view of the main board, with the radios removed and placed to the right in the photo. The Atheros radio is at the top right (with heat sink), and Broadcom module below it.

All done with the innards. Let's go set it up.