So how does Broadcom's Afterburner stack up against Atheros' Super-G? Or in product terms, does Linksys' WRT54GS / WPC54GS pair beat NETGEAR's WGT624 / WG511T duo? Take a look at Figure 13 and decide for yourself. 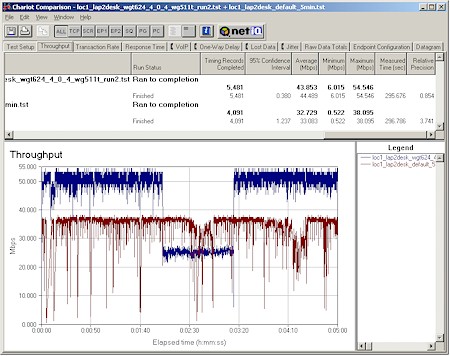 Figure 13: Afterburner vs. Super-G
(click on the image for a full-sized view)

The NETGEAR pair was tested under the same conditions as mentioned before, i.e. close range and no other equipment operating. I did, however, use unreleased firmware and drivers obtained from NETGEAR that are completing QA testing and should be available shortly. I also set the WGT624 router to Auto 108 mode (the card automatically adjusts).

At an average throughput of around 50 Mbps, the NETGEAR products using Super-G clearly beat Linksys' Afterburner-based offerings, but only when Super-G is running in its controversial channel-bonding mode. As the plot shows, Super-G drops out of channel bonding on a periodic basis to ensure that non Super-G products get a chance to communicate, which lowers its average best-case throughput to about 45Mbps.

But Super-G is supposed to drop immediately out of channel bonding as soon as a non Super-G client comes in range - though it has been Broadcom's contention that this doesn't happen. If you assume that Super-G does adjust, however, the speed advantage goes to Afterburner, since its 36 Mbps clearly beats Super-G's non-bonded 26 (or so) Mbps. On the other hand, as Figure 7 shows, Afterburner's speed drops pretty quickly with distance and / or obstacles - enough so to question whether Afterburner provides any significant benefit under real-world conditions.

By the way, even though these results (using faster WinXP test computers) are better than I obtained in my previous Super-G testing, I still can't verify Atheros' claim that Super-G "will consistently deliver over 60 Mbps of end-user TCP/IP throughput using typical data files".

NOTE: The unreleased drivers and firmware I obtained from NETGEAR are supposed to contain the kinder, gentler version of Super-G that Atheros announced a few weeks ago (mid-March 2004), but I didn't test those claims for this review.