The GS uses a very different board design than its predecessor (Figure 1). 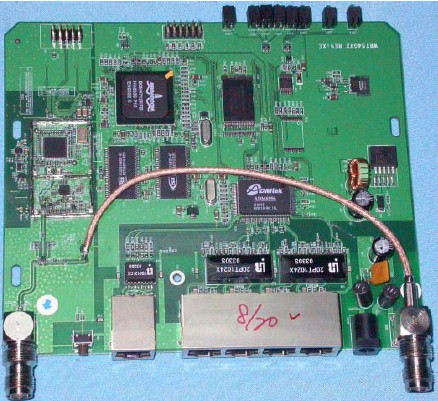 Figure 1: The WRT54GS board

The radio is now integrated onto the main board instead of using a separate mini-PCI radio. Linksys also tells me that it uses a different Broadcom chipset, that's needed to support the "Afterburner" capability. This means that WRT54G's can't be upgraded to be equivalent to the "GS". So if you want to play, you'll have to pay.

The radio is cabled to two RP-TNC style connectors (that Linksys uses throughout its 802.11b product line) which have two moveable, jointed dipole antennas attached.

Something that hasn't changed is that the GS is still based on Broadcom's BCM4702 Wireless Network Processor, supported by RAM, Flash memory, and an ADMtek 6996 for the 10/100 WAN Ethernet port and four 10/100 switched LAN ports.