I previously reviewed the AirMagnet Spectrum Analyzer, which is essentially a rebranded Cognio ISMS Mobile. (Cognio appears to be rebranding ISMS Mobile itself as "Spectrum Expert".) Although the AirMagnet / Cognio product costs just shy of $4000, I thought it would be instructive to see what an extra $3900 buys. Table 1 summarizes the key product specs and features.

Most of the features above are self-explanatory, but three need some explanation. Auto Interferer ID represents the ability to analyze the signals being captured, match them against signatures of interferences sources such as cordless phones, microwave ovens and other RF sources, and display an indication of devices found.

Device List is essentially that same analysis capability put to use, but for identifying and displaying valid Wi-Fi devices. Finally, Device Finder allows you to choose an identified valid device or interferer and physically track it down by displaying a signal strength vs. time chart and real-time signal strength meter to be monitored as you wander around in search of your quarry.

I should also note the way that MetaGeek has implemented Wi-Spy's record and playback features. The record mode saves captured signal level data in 1 kHz increments from 2.400 GHz to 2.485 GHz to a CSV format file that can be opened with Excel or pretty much any spreadsheet. Opening the CSV file for playback lets you view the captured session in either Analyzer or Spectrograph mode, regardless of how you viewed it during capture, since both are alternate views of the same basic data. And MetaGeek uses the playback feature to teach users how to recognize signal patterns from cordless phones and microwaves by making files of captured sessions available for download. 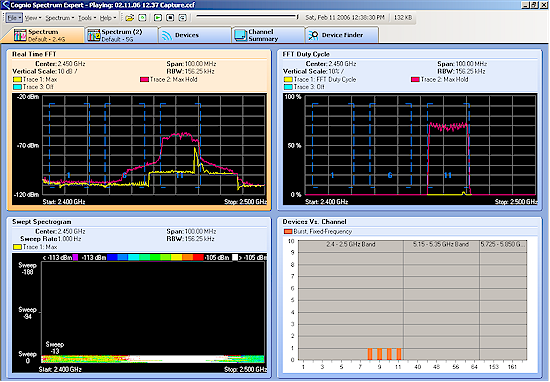 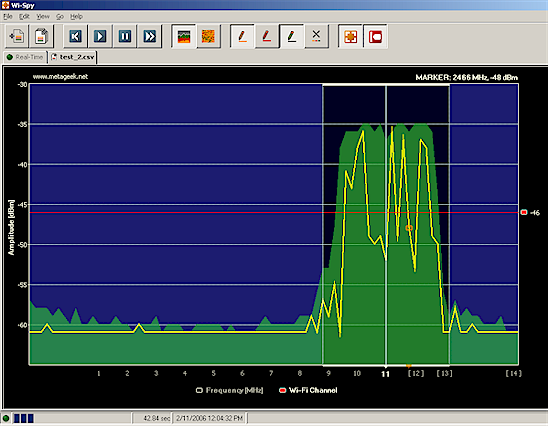 However, from the testing that I did, it appears that MetaGeek has made some intelligent trade-offs to come up with a product that's 40 X cheaper than Cognio's, but that still delivers a very useful combination of features and performance.