To test Wi-Spy's performance, I set up a test WLAN consisting of a Linksys WRT54G and WPC54G client. I generated a nice, regular spectrum by running IxChariot's throughput script continuously sending data between the client and AP. I then loaded the Wi-Spy and Cognio hardware and software onto another notebook (which I'll refer to as the measurement notebook) and ran them simultaneously while moving around to a few of my standard wireless test locations.

Figure 4 is a cropped screen shot taken while the measurement notebook was sitting in Location 1, which is the same room as the wireless LAN that I had set up. 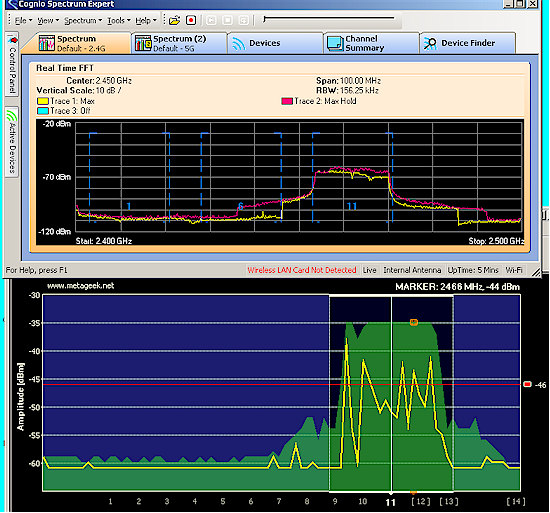 Both applications were set to show two traces - peak max and real-time data - and the difference is immediately apparent. Wi-Spy's real time plot (in yellow) appears to be coarser than Cognio's (also in yellow), which I suspect is due to a wider resolution bandwidth in Wi-Spy. So you have to take Wi-Spy's jagged real-time plot with a grain of salt, since the full-blast, continuous nature of the IxChariot script that I used should generate a spectrum closer to that shown by the Cognio device than Wi-Spy.

I also tried to resize both windows to match the graph scales as closely as I could. But it didn't matter that much anyway, since the Wi-Spy Amplitude scale didn't match the Cognio's at all. Since I didn't have a calibrated reference RF source to measure, I can't pass too accurate a judgement on either product's signal amplitude accuracy. But from previous experience, I have to say that the Cognio's readings are closer to reality than Wi-Spy's.

I next moved the measurement notebook to my Location 2, which is on the same floor and a few rooms away. 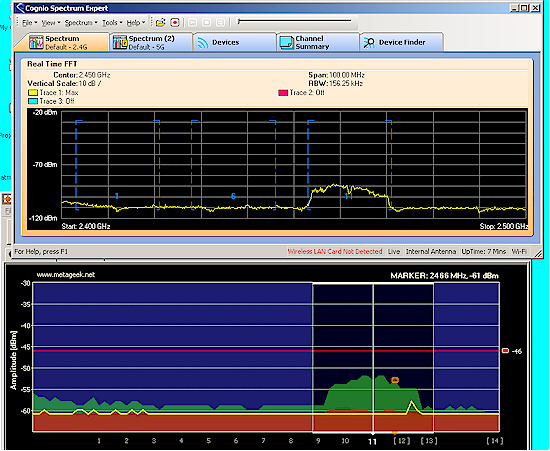 Figure 5 shows that the peak level measured by the Cognio drops from around -75 dBm to about -90 dBm, while Wi-Spy shows a drop from -35 dBm to around -53 dBm. So while the absolute reference levels differ greatly, the relative levels seem to match pretty well with both products showing about a 20 dB drop in signal. Note also that I had to use Wi-Spy's maximum trace to make the previous determination; a technique that I found to be very useful.