Even more disappointing than its mixed WLAN performance was how an RM240 WLAN interacted with a nearby "legacy" 802.11g wireless LAN. Figure 22 shows the test setup, which used Broadcom-based Linksys gear - a WRT54G router and WPC54G CardBus card. Both wireless LANS used IP addresses in the same subnet and were connected via a 10/100 switch, so that IxChariot traffic could be sent to both WLANs from the IxChariot console that resided on the RangeMax 240 client notebook. 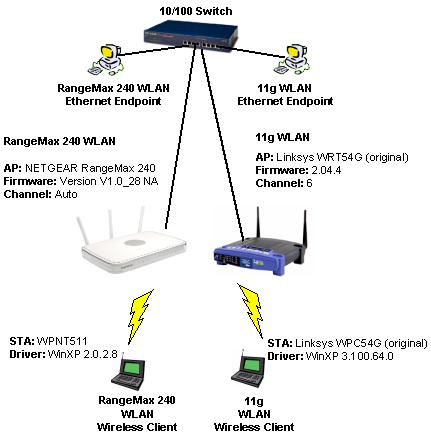 From conversations that I had with numerous people from Airgo, the way Adaptive Channel Expansion technology (ACE) is supposed to work is that it will first try to tune away from a detected neighboring wireless LAN, so as to minimize co-channel interference. Then, if there are multiple wireless LANs occupying more than one channel, ACE will drop back to using a normal 20MHz bandwidth, i.e. a single channel, instead of its default 40MHz bandwidth, i.e. two channels.

What I found, however, is little evidence of either of these mechanisms operating, at least not in what I thought was a relatively easy test case, i.e. a neighboring wireless LAN with a strong, easily-detectable signal, blasting away with continuous traffic, as one might during the local transfer of a large file. 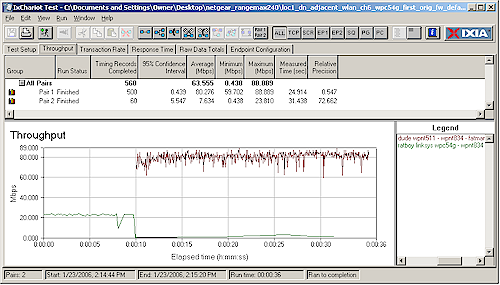 The RM240's defaults ended up having it set its primary channel to 6 (6P) and secondary to 2 (2S). So I also set the 11g WLAN to Channel 6 to test ACE's auto-tuning capability and made sure to reset the RM240's channel selection to Auto.

Unfortunately as you can see from Figure 23, the RM240 WLAN stayed camped on 6P+2S and crushed the 11g WLAN. I ran the test numerous times, and also tried running uplink instead of down, with similar results. By the way, this test was run with the 11g AP and notebook about 6 feet away from the RM240 in the same room.

So since ACE wouldn't move the RM240 channel, I decided to move the 11g WLAN to Channel 11 to see if the RM240's 40MHz bandwidth use produced any ill effects. Figure 24 shows the much-improved results. 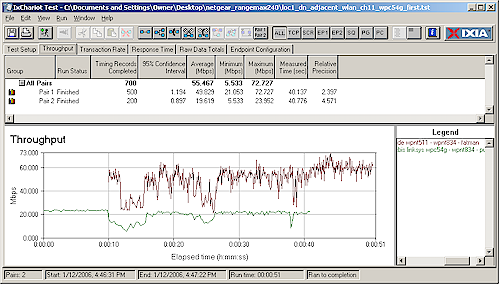 Although you can see some interaction between the two wireless LANs, in general, it appears that the RM240 drops about 20Mbps of throughput so that the 11g WLAN can operate at its full 20-23Mbps. So the conclusion here is that had ACE been properly able to tune away from a single nearby "legacy" WLAN, it's unlikely that WLAN owner would ever even know that an RM240 WLAN was around.