When I shared these results with Airgo and Netgear, I was told that I had found a bug and that it was just a matter of tweaking some software settings and ACE would be working properly. So I agreed to hold the review for a few days to test new firmware. When that firmware came in, I was instructed to run the test with the neighboring WLAN set up at least on the other side of a wall. I went that one better and moved the 11g WLAN two rooms away (about 30 feet) and even removed the WRT54G's dual dipoles to even further attenuate the signal, and set the client notebook right next to it. 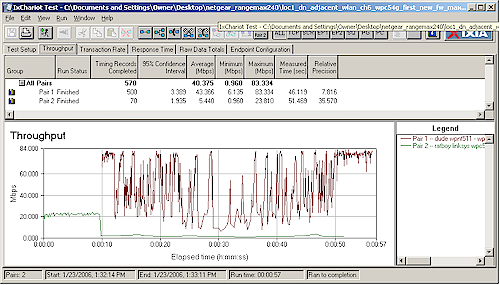 Comparing Figures 25 and 23, you can see that with the new firmware, the RM240 WLAN definitely is trying to better accommodate the neighboring 11g WLAN. But since ACE again refused to move the RM240 from occupying Channels 6 and 2, the 11g WLAN still got stomped on. (Just before this review was posted I learned from Airgo that something got broken in the patched firmware build that I had received, so the results I got were not surprising.)

So the bottom line at this point is that the ACE mechanism that is supposed to tune away from neighboring wireless LANs is at best buggy and at worst currently broken. I should also note that Airgo told me that when it is working, it will take 5 to 10 minutes (!) to tune away from a neighboring WLAN that is detected after the RM240 completes its initial power-up sequence - if the RM240 sees "lots of continuous traffic" in the neighbor.

Given the complexity of MIMO and 802.11n, I suspect that it will take awhile for Airgo and other vendors to work out the interoperability issues, particularly with legacy equipment. In the meantime, buyers of MIMO and soon-to-be-available "draft 11n" products should assume nothing with regard to throughput sharing in mixed wireless LANs and interference with neighboring "legacy" 11b and g WLANs.