But what happens when the legacy WLAN is parked on Channel 6? According to Airgo, both its and all 11n products won't be able to "tune away" from this situation. The reason has to do with fundamental design decisions that were made long ago with regard to the technology to be used in 802.11n, that resulted in the requirement for 40MHz of contiguous band. The result is that the Primary and Secondary channels for 802.11n 2.4GHz band operation will always be separated by four channels, i.e. 1P + 5S, 8P + 4S, 11P + 7S, etc.

This means that even with an 802.11n WLAN channel forced to 1 or 11, there will be enough channel overlap from the 40MHz of occupied bandwidth to pretty much slow a legacy WLAN on channel 6 to a crawl, i.e. a few Mbps of throughput.

To confirm this, I ran my throughput test forcing the RM240 to Channel 1 (with the secondary set to channel 5) and leaving the 11g WLAN set to Channel 6. The result shown in Figure 29 is typical of performance I observed using either the original or patched firmware from Airgo. 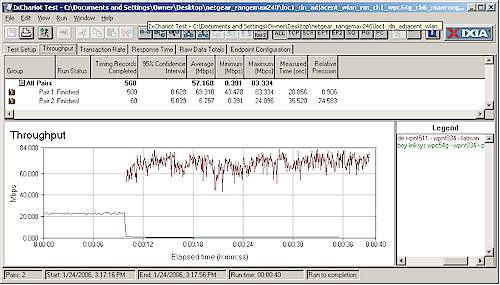 When you compare it with Figure 23, which is the test with both the RM240 and neighboring WLAN occupying Channel 6, things don't look look that much different, i.e. the 802.11g WLAN's throughput gets hammered pretty badly.

Of course, ACE (and all 802.11n gear) has effectively only one non-overlapping 2.4GHz band channel to play with while occupying a 40MHz bandwidth. So in order to not interfere with multiple neighboring legacy 2.4GHz WLANs, 11n gear will need to drop back to using only a single 20MHz channel. This, of course, will also drop its throughput by about half!

So I expect that 802.11n gear will be designed so that it takes its sweet time in deciding whether it is really hearing an adjacent legacy wireless LAN, or just a microwave, cordless phone or other 2.4GHz noise source that it doesn't have to pay attention to.

By the way, in all of my testing, I never once saw the RM240 drop back to occupying a single 20MHz channel.