Since buyers of the RM240 are likely to have old 11g and even 11b gear around, I ran some tests to gauge performance when both RangeMax 240 and other flavors or clients were associated and operating with the RM240 router. The basic setup was essentially the same that I used for the previous throughput testing, except this time I added another notebook (Fujitsu S2020 w/ Athlon 2100+, 496MB and WinXP Home SP2) that I loaded a few flavors of wireless clients into.

I used the same IxChariot script as before, changed only so that the second wireless stream flowed to / from the second notebook instead of from the second Ethernet RM240 client. I left the router set at all defaults except the channel forced to 6, and both notebook adapters operated with their defaults. 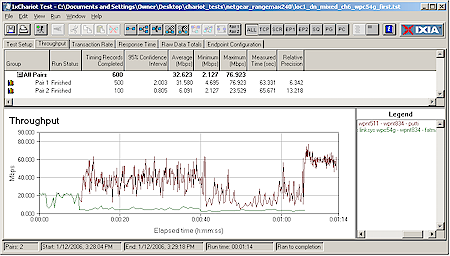 The results were similar to those I obtained in earlier True MIMO mixed WLAN testing, with both clients taking a significant throughput hit and a lot of bandwidth left unused. Figure 18 shows results with both clients running downlink, but similar effects were observed both when running uplink and if the RM240 STA started before the Broadcom STA.

Next, I tried the Atheros-based Gigabyte GN-WPEAG mini-PCI card that I had installed into the Fujitsu notebook as a DIY field upgrade. This card uses Atheros' AR5002G chipset, but I ran it with drivers that WinXP automatically installed, so I don't think any Super-G modes were enabled. (Not that it would matter, since the card would see the RM240 router as just an 11g AP anyway.) 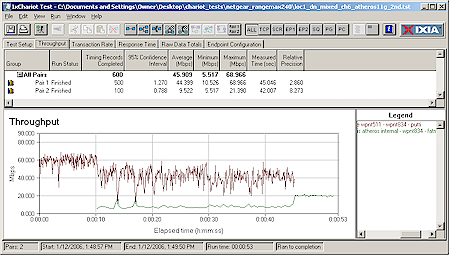 Figures 19 shows behavior similar to that obtained with the Broadcom card, although the RM240 STA appears a bit better behaved than the Broadcom.

My last experiment that involved mixing gen 2 and gen 3 Airgo clients, yielded unexpected results. I used the Belkin G Plus MIMO adapter, with its original XP driver (1.5.0.147) and let the Belkin Client Utility run the adapter instead of XP wireless zero config. As with the other adapters tested, all settings were left at their install defaults. 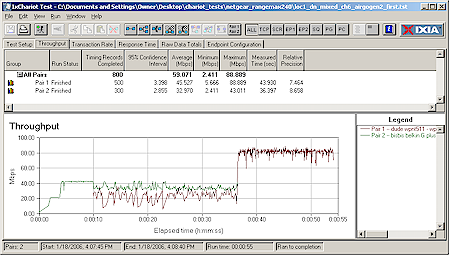 In both Figure 20, which shows downlink and Figure 21, which shows uplink, you can see the RM240 (Airgo gen 3) pair drop below the throughput of the gen 2 pair when both are running! I would have expected more equal throughput sharing, if not a throughput advantage for the gen 3 chipset. Evidently, Airgo still has some performance tuning left to do! 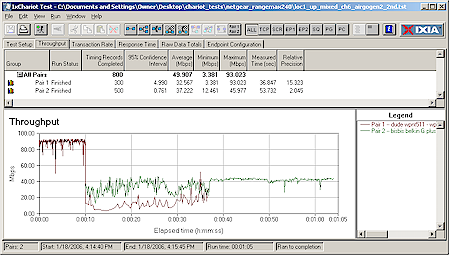 I didn't run any tests using 11b clients, since the results (except for the mixed Airgo gen 2 / 3 tests) hadn't revealed significantly different behavior than I'd seen in my original True MIMO testing. Basically, when it comes to mixed WLANs, you can expect a less efficient use of total bandwidth and for Airgo clients to generally get a larger slice of the bandwidth pie.