We found a defect of manufacture when we removed the top part of the case. Even when we took the device out of its package, we heard some rattle inside it. It proved to be worse than industrial garbage as we first thought it to be. The photo shows that the cause of the noise was a wire that connects the antenna connector on the case with the connector on the router’s Wi-Fi card. 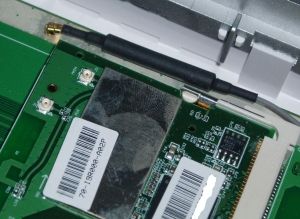 There’s no talking about establishing a good wireless connection here. When the antenna cable is detached, the level of the router’s signal was -90dB even in its immediate vicinity. We think it is a serious defect considering that you can’t solve the problem without getting inside the device and thus losing the warranty. The antenna may fall off during transportation, and we guess our case is not a rare exception.

There are two cards inside the router, a main card and a Wi-Fi module. The latter is a small card plugged into the main card’s miniPCI slot. 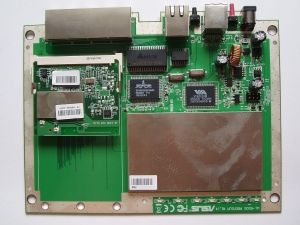 There are two main chips on the card. One is manufactured by Broadcom and is called BCM4318E. 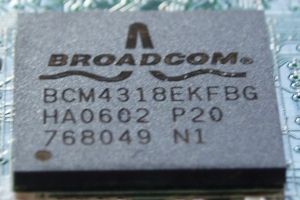 This chip is a highly integrated wireless controller with support for Afterburner and BroadRange technologies intended to increase the efficiency of a wireless connection and to enlarge the coverage area, respectively. These technologies will only work if they are supported on the client device. We found the chip specification on the website of its manufacturer: 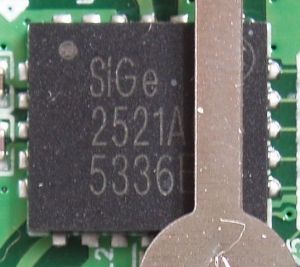 You can attach two antennas to it and they will work alternately. This is indeed implemented in the router: the first, dipolar antenna is external and the second antenna (inverted F) is wired on the PCB.

To tell you the truth, the PCB of the ASUS WL500g Premium (right) looks much alike to the reference PCB from Broadcom (left): 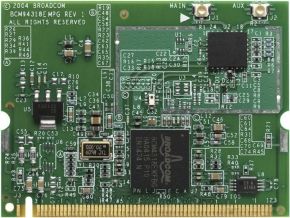 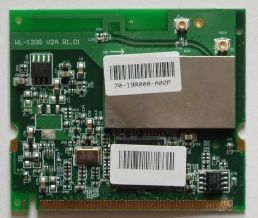 The main difference is that the right PCB is longer to wire the second antenna, has a modified power circuit and its RF module is rotated by 90 degrees. There are no great changes in the components; the two main chips are the same on both the PCBs.