For troubleshooting purposes a console can be connected to the WL500g Premium via a UART bus.

The appropriate connector is located near the right edge of the main PCB.

Before we start to discuss the options offered by the web-interface of the control software, we have to talk about the firmware, about that block of data which is written into the router’s flash memory. The firmware is perhaps the biggest problem of the WL500g Premium. Well, it’s not hopelessly bad. If the user is quite satisfied with the options available in the official firmware (we’ll discuss them later on), he/she won’t see any limitations, but there is quite a lot of users who want more than the standard options. Fortunately, the router allows to replace (rewrite) the standard firmware with alternative versions developed by third-party enthusiasts. This is the way to enhance the router’s functionality.

There are a number of reasons why you may want to search for alternative firmware versions for your WL500g Premium, but a majority of them come down to a problem with a PPTP (VPN) connection with simultaneous routing of the traffic into the local network. The standard firmware doesn’t provide the necessary options when the user is connected to the provider’s local network with a static (or dynamic) IP address and has access to the Internet from the same provider via a VPN (PPTP) connection and is assigned an additional external dynamic IP address. This is not the only reason to use an unofficial firmware version. Some versions provide an opportunity to communicate with the router via Telnet or SSH in which case your options are virtually infinite (they are limited by the capabilities of the router’s hardware only) – you can change any parameters of the firmware, install new applications on the router, write your own scripts, etc.

At the time of our writing this review we could only find three different unofficial firmware versions for the WL500g Premium. The first version is issued by ASUS itself but has a beta status. It is numbered 9.9.7.1 and differs from the previous versions in its correct support for the PPTP+DHCP variant. The second version is called OpenWRT. The developer’s website is located at http://openwrt.org and the latest version is RC5. This firmware implements Telnet-based access to the router and solves the VPN related problems, too. The third alternative version is written by an enthusiast who goes under the name of Oleg. He writes firmware of his own for some network devices from ASUS, including the WL500g Premium. Shortly before the writing this review he put his own firmware for the WL500g router on his forum http://wl500g.info. Here is the link to the file: http://oleg.wl500g.info/gp/WL500gp-1.9.2.7-7f-pre7.trx. This is not a release, but a beta version, yet it should perform its main functions well enough.

So, how do the alternatives work? Our router refused to accept the OpenWRT firmware, saying the file image was corrupt. ASUS’ firmware worked, but we couldn’t normally set up a VPN connection under the above-described conditions. Oleg’s firmware worked the best of all. It is not free from minor drawbacks, yet it does its job, as its author promises. The most important thing is that it helped us solve the problem of VPN connections in the best way: after we specified necessary settings, the provider network began to work simultaneously with a VPN tunnel (although ASUS’ unofficial firmware is declared to support only one connection variant at a time). The only considerable drawback of Oleg’s firmware is that is lacks support for the Download Manager. Perhaps the author will implement it in the final release of his firmware.

To enter the options menu, you should type the router’s IP address into your browser’s address bar (by default, it is http://192.168.1.1). The page that appears shows the status of the Internet connection and a small Login button. Click the button and type in your login and password (by default, “admin” and “admin”) to enter the menu. Here’s the home page of the settings menu:

So, the Wireless group is all about the settings of the wireless interface. The basic wireless connection options can be found in the Interface subgroup. 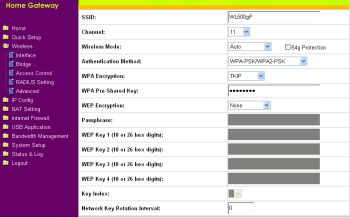 Here you can specify the SSID the router can be recognized by. Then you select the radio channel. Depending on the region the router is meant for, it can allow to use 11, 13 or 14 channels. Our sample allows 11 channels (North America). The Wireless Mode option specifies the wireless standards the router can work with. By default, it is set to support 802.11b and 802.11g standards simultaneously, but you can change it to support only one of the standards. You can choose 802.11g to increase the connection efficiency but lose the compatibility with the previous standard. The other settings of this subgroup concern data encryption. Three encryption standards are supported: WEP, WPA and WPA2. Both variants of the WPA standards can be selected: either with a preshared key or with a RADIUS server.

The Bridge subgroup helps set the router up in the WDS mode (Wireless Distribution System).

In this mode all the access points can work via the wireless interface not only with client devices but also with each other. This becomes possible by using a special type of packets and a table of MAC addresses.