The latest word I have is that we won't be seeing draft 11n products that incorporate the protection mechanisms in Draft 1.10/2.0 for legacy 2.4 GHz gear until the May/June time frame. So I did not do any interoperability or "bad neighbor" testing. Instead, I used the Azimuth to compare 2.4 and 5 GHz band performance. I also ran comparisons with a dual band a/b/g router and card.

Azimuth advised starting with the ACE set to Butler mode. Butler mode emulates a unity gain, non-fading channel with a fixed set of antenna-to-antenna phase relationships. According to Azimuth, Butler mode provides a channel with a "high degree of linear independence". In simpler terms, Butler mode essentially makes the ACE disappear and so can be used to look at best-case performance.

I also spent some time trying to correlate results between the Azimuth W Series MIMO test and the ACE. After some back-and-forth with Azimuth, I was able to get the shape of the performance vs. range "waterfall" curve to be pretty similar, but found that gain differences in the ACE's algorithms shifted the curves along the path loss axis with respect to each other. So if you compare these results to those in my earlier tests, keep that in mind.

Let's start out by looking at the throughput vs. range curves. Figure 18 shows 2.4 GHz band results in both 40 MHz (channel bonding) and 20 MHz modes. Figure 19 shows the same thing for the 5 GHz band. 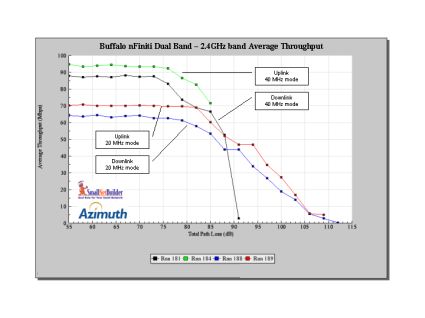 It's immediately obvious that with the current nFiniti firmware, you have your choice of high speed and shorter range or lower speed and longer range. The main reason appears to be that the range setting algorithms don't allow downshifting from 40 MHz to 20 MHz mode when the signal gets too low to sustain connection in 40 MHz mode. In other words, there is no auto 20/40 MHz mode.

The other observation is that uplink speed is greater than downlink. This is something that is consistent throughout my test results, so it's possible that it could be due to TCP/IP or other settings that I don't futz with. 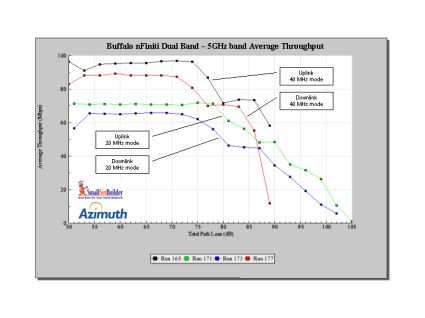