The second, "active", flavor of scan can show speed, retry rate and % packet loss in addition to the signal, noise and S/N data logged by passive scans. Figure 13 shows the connection Speed results from a scan of the Channel 4 (OvisLink) 11g router. 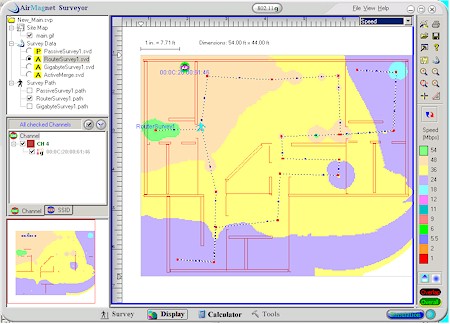 Figure 13: Active Survey - Chan 1 speed
(click on the image for a larger view)

Since connection speed tends to be the bottom line for many applications, this can be a very informative map. But before you go telling the boss that everything is peachy, you need to remember that this map, and all of Surveyor's pretty pictures, are just one card's "opinion" of your WLAN's signal environment.

WLAN performance is just as dependent on client card performance as it is on that of your array of access points. More to the point, roaming and speed selection algorithms are strictly a function of a client's driver and firmware. So for most accurate results, AirMagnet recommends that surveys be done with either the same brand and make of client card used most often by WLAN users, or at least one of AirMagnet's supported cards using the same chipset as your favorite card.

An approach to achive more realistic surveys might be to perform multiple surveys using a different Surveyor client each time. Unfortunately, AirMagnet's current licensing scheme doesn't allow you to swap client cards easily, so this could get costly with a Surveyor license required for each card. But AirMagnet says they are working on improved scheme that will provide a "dual licensing" mechanism.

I think that AirMagnet also needs to add at least one mini-PCI design using each of the major wireless chipsets to its list of supported devices, since built-in WiFi has become the way to go for many enterprises. AirMagnet's list already includes Cisco's MPI350 and IBM's ThinkPad Mini PCI a/b/g (based on Atheros' AR5212 chipset), but Centrino is obviously the most significant omission that needs to be corrected.

One thought on “AirMagnet Surveyor reviewed”